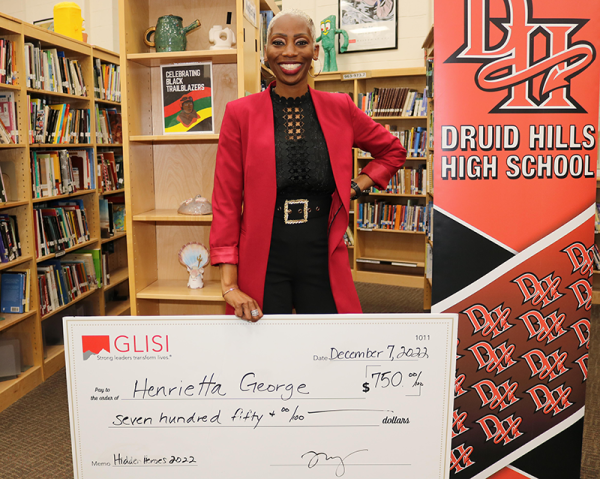 Henrietta George has long been a shining light at Druid Hills High School (DHHS). For more than 18 years, she has worked tirelessly—and successfully—to build competitive athletic programs at the school. Through it all, she’s remained a positive role model not only for student-athlete and students at DHHS but also for her peers and administrators with whom she works.

“It feels amazing. I’m speechless because this award means a lot,” Coach George said. “It was an award that involved everyone in the community. It lets me know that I have a lot of supporters, so it means a lot.”

GLISI presented Coach George with the check on December 7 in front of her family, friends, students, and coworkers. DHHS Principal Mark Joyner, a teacher at Stephenson High School when Coach George was a star track and field student-athlete, said she is a phenomenal athletic director.

“She’s leading the way in DeKalb County. She was honored multiple times last year as Athletic Director of the Year by numerous organizations,” he said. “I really respect the work that Ms. George has done. I think she’s a wonderful leader and a confidante of mine. Not only is she a mentee, but she is a friend, and I’m proud of her.”

Coach George’s track and field athletes couldn’t stop singing her praise. They described her as a dedicated coach who helps mold them on and off the track.

“[She] has always been a role model to me,” said junior Harley Martz. “[She’s] very dedicated, very hardworking. I know that we don’t have money all of the time, but [she] has the strength to put in her all and give us all opportunities the way that she can, and I appreciate that.”

“Some of the coaches I had back in China, elementary school, and middle school just tried to push me to be better, and they didn’t care about me as a person. But Coach George cares about my emotions,” Crawford said. “I want to thank her for caring about me, pushing me, and being a great all-around coach.”

“She has been nothing but a pleasure to work with in every capacity, every climate, every weather, and every condition,” said Druid Hills cross country coach Sam Brown. “She advocates for our sports, school, coaches, and kids. That’s why we love her so much. She has done a great job building and boosting the support for athletics at Druid Hills.”

GLISI is a proud coalition of education, business, and government leaders who share a passion for improving public education in Georgia and see leadership development as critical in realizing system-wide change. The coalition launched the “Hidden Heroes” campaign in October 2020 to generate a wave of gratitude for educators and shine a light on the work they do every day.

The selection process is simple: The community nominates and votes for educators in their circles to help the educator win the top prize—a $750 check. In this instance, the DHHS Athletic Association nominated Coach George for the award.

“It’s humbling,” Coach George said of the praise from her students and coworkers. “You do things to support others. I like to make kids feel good, so to know that my hard work and efforts paid off and people see it and appreciate it really means a lot.”

Coach George said she plans to spend the money on a staycation and visit the spa. “I’m going to take care of me.”