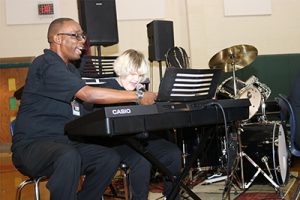 Hitting All the Right Notes

Depending on your preferred genre of music, these are just a few of the titans in the entertainment industry who have excelled at performing despite being visually impaired.

While we don’t want to get ahead of ourselves, perhaps someday, an emerging hometown hero can soon add her name to this illustrious list. Then again, no one should ever bet against this survivor based on the improbable journey of Alexandra Guilfoy, a remarkable 14-year-old who’s overcome adversity her whole life.

Born 16 weeks premature, Alexandra has bravely found a way to shine despite being blind and diagnosed with what is medically called Stage 5 retinopathy of prematurity. Her exceptional talent began to emerge despite multiple surgeries and even having one of her vocal cords paralyzed during one of the procedures.

“She just started singing, and it eventually got her voice stronger,” said Diane Guilfoy, Alexandra’s mother. “She had surgery to help fix some of the vocal problems, and she picked up music right away and just started singing. She would listen to songs and pick them up easily—sing them and memorize them.” 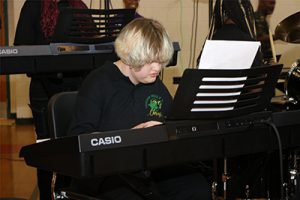 Alexandra, a 7th grader at Freedom Middle School, sings in the school chorus and plays piano with the student band. Last month, she played piano and sang lead as the school’s band nailed its performance of the song “The Bones” by Maren Morris during an inspired Red Ribbon Week pep rally.

Her musical journey began at age six, playing piano after her parents discovered that she could sing and had a rhythm for music through her drumming skills. First, they enrolled her in Kindermusik, a music and movement program for children. In no time, Alexandra wowed her teachers, leading to her parents enrolling her in piano lessons.

Because Alexandra is blind and therefore cannot read music, her teacher implemented a creative process of communicating lessons through the WunderKeys Piano method books. That approach quickly worked wonders!

“She named her fingers and would teach her to play by using Pointer Panda and Middleton Mouse,” Diane said.

Today, Alexandra is comfortably content being around her fellow talented friends in the chorus and band at Freedom Middle. However, her performances are getting noticed beyond the school walls.

She actively participates in pageants for children and adults with special needs. Later this month, Alexandra will perform at the Songs For Kids Foundation, a two-day event featuring more than 100 kids and young adults with illnesses and disabilities. The event will focus on the entire catalog of pop singer-songwriter Taylor Swift.

Alexandra said she hopes to inspire others to live their wildest dreams regardless of their challenges.

That’s a message that absolutely hits all the right notes.